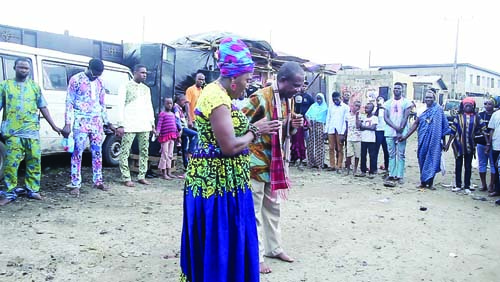 •Participants at the previous edition

The family show has become a staple during the Valentine’s season. It features poetry, drama, music and photo exhibition. “And as the world is celebrating the season of “Love”, in the spirit of Valentine’s Day, we are also joining our voice to the universal message, in addition to the move to rekindle art appreciation on the street, – in children and adults alike.

The displays will showcase how art can beautify not only the environment but our world. It is driven by conversation and the need to preserve the environment,” she said.

Known on stage as Evelyn D’Poet, the show is her art-to-the-street project that is hinged on the message of peace and unity.

The initiative, which began in 2018 in Agege, is in its fourth edition. It will hold in  Diamond Mine School, No.1 Adeyeri Crescent, off Oyemekun Bus Stop in Ogba, Lagos.

Through her initiative, Osagie has brought a unique freshness to performance (poetry and drama) and visual art (photography).

Osagie, who currently works with The Nation newspaper, is also the initiator of Project #TASAA campaign. She expresses her voice through diverse arts, especially photography and performance poetry.

With the theme, Embers of Love, guests will be treated to an outdoor art “Together series” installation, open-air poetry, drama and music concert.

“The event is a melting pot that seeks to promote the appreciation of the arts, the environment and communality.It brings together different art forms and people of diverse social strata from all over the state; while also promoting fresh talents even as it showcases my creative expressions.

“It started two years ahead of the 2019 elections in view of diverse national and security concerns in Agege, then moved to Somolu and Isolo. Ogba is the fourth and a special edition not only because of its unique timing because but it will have over 200 primary school children present with their parents, among other guests.

The theme Embers of Love, is meant to reawaken the importance of love/peace as indispensable continuum in our polity in the wake of security and other national concerns,” she said.

The poetry and music concert will feature acts between the ages of 12 and 60 plus, such as a 12- year-old singing sensation, Chidindu Okorie and his group; the WMI drama group and others.

The exhibition usually showcases human installation using market women and our traditional wares and furniture to create a local milieu that is meant to reignite the feeling of the old days in her audience.

This edition’s play entitled: “Kitchen Revolution” and written by Osagie will be performed by WMI cast drawn from different strata of the society, including market women in her human installation.

She said: “The play is inspired by Prof. Wole Soyinka. I was at a briefing where he, reacting to insecurity issues and Amotekun, said: ‘Hunger is real!  Poverty is real! It’s very much with us and reaching a critical mass.

Amotekun is only part of the story. We should start thinking of ‘Soup Kitchen’ as obtained in other parts of the world’”.

I’m a coward, when it comes to intra-party fighting – Oshiomhole

Olubadan at 93, Makinde eulogies the monarch good virtues,says his reign continued to witness massive developments across all spheres in Ibadanland.