Crash: Kobe Bryant And Wife Had A Deal Never To Fly A Helicopter Together 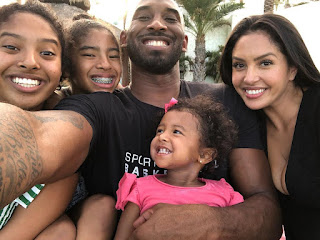 The marriage between Kobe Bryant and Vanessa Laine Bryant which has spanned more than two decades, came to a tragic end on Sunday, Jan. 26 when the NBA legend died in a helicopter crash.

The American basketball legend who was known for flying helicopters made it a point not to fly together with his wife.

“He and Vanessa had a deal that they would never fly on a helicopter together,” a source tells PEOPLE of the couple.

Bryant, his 13-year-old daughter Gianna and seven other people were killed in Sunday’s crash. Bryant is survived by Vanessa, 37, and their daughters Natalia, 17, Bianka, 3, and Capri who was born in June 2019.

The Laker legend and his daughter were on their way to a youth basketball game at the time of the crash, according to ESPN.

In November 1999, 21-year-old Bryant met 17-year-old Vanessa Laine while she was working as a background dancer on the Tha Eastsidaz music video “G’d Up”. Bryant was in the building and working on his debut musical album. The two began dating and became engaged six months later in May 2000.

Two months ago, Bryant penned an emotional note to his wife, Vanessa on his Instagram page in celebration of the first time the couple met.

“On this day 20 years ago I met my best friend, my Queen @vanessabryant I decided to take her on a date to Disneyland tonight to celebrate old school style (pre 4princesses) I love you my mamacita per sempre” (Per sempre means “forever” in Italian.)

The same source also told PEOPLE that Bryant “only” flew in helicopters with pilot Ara Zobayan, who was among those killed in the crash.

Bryant turned to helicopters to travel around the Los Angeles metropolitan area so he would have more time with his family and less time stuck in traffic, he revealed in a December 2018 interview.

“I was sitting in traffic and I wound up missing like a school play,” he told Alex Rodriguez in 2018. “I had to figure out a way where I could still train and focus on the craft but still not compromise family time.”

“So that’s when I looked into helicopters, to be able to get down and back in 15 minutes and that’s when it started,” he added.

Breaking: Buhari Gets Approval Of Another Request Of $22.7 billion Loan

Davido embarks on self isolation after fiancée contracted COVID-19