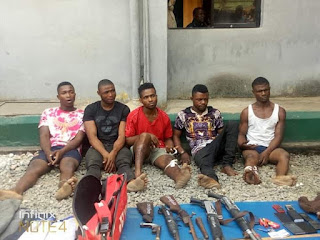 The Abia State Police Command has arrested five suspected armed robbers who robbed and killed a couple in Umuahia, the state capital.

The husband and wife, Mr. and Mrs. Darlington Chinyere Uzoma, were gruesomely murdered last Saturday evening in the presence of their children while returning home after the day’s business.

The robbers, during an operation that fateful day along Secretariat Road, Ogurube Layout, robbed their victims, dispossessing them of what they made for the day from their egg supply business. They subsequently shot the couple, who hailed from Ugwegu community in Afikpo North Local Government Area of Ebonyi State.

The dastardly act generated public outcry and protests in Umuahia, prompting the Police to swing into action and, within two hours, rounded up the suspected hoodlums.

According to Abia State Police Commissioner, Mr. Ene Okon, the suspected armed robbers were operating from a tricycle and had snatched a Sienna van with registration number RBC 477 RL along Health Centre Road in World Bank Housing Estate in the state capital.

They used the van to double cross and block the Uzomas, forcing their bus to fall into the gutter, where they robbed them and shot the man at the back of his neck. His daughter, who is preparing to write her West African Examinations (WAEC), on seeing blood gushing out from her father’s neck, tried to stop it with her palm, saying: “Daddy, the blood is too much.”

At this point, one of the armed robbers shot at the girl but the mother pushed her away and received the bullet. The robbers fled. Both husband and wife died before they were taken to Federal Medical Centre, Umuahia.

Uzoma, a major dealer in eggs in Umuahia, was said to be returning to his Agbama Estate residence with his wife, daughter and son when they were attacked by the robbers, after supplying eggs to a customer at the Orie Ugba neighbourhood foodstuff market in Umuahia metropolis.

On receiving information about the robbery operations, the Police cordoned off all routes leading to the robbery scene.

“Following the incidents, operatives from the Central Police Station, Umuahia, and SARS team on Operation Puff Adder went after the hoodlums and intercepted a tricycle conveying two of the hoodlums named Precious Chukwuebuka Okoro and Ogbonna Ifeanyichukwu Justice,” Okon said.

He said that interrogation of the duo resulted in the subsequent arrest of other members of the gang, namely 25-year-old Enyinna Asiegbu who was released from Okigwe Prisons last December; 26-year-old Promise Sunday Obilor (a.k.a Esere, the leader of the gang and Deputy to the dreaded late Sampson Iheukwumere Nwokocha a.k.a Grave) a notorious armed robber who was gunned down by the Police last December 10; and Emezuo Kingsley (a.k.a Parkins) who allegedly shot the couple.

Ene said that Esere had been on Police wanted list for eight months, adding that he was the second in command to Grave and inherited the gang after Grave was eliminated.

“Two pump action guns, two locally-made shot guns, three live cartridges, and one expended cartridge were recovered from them,” the Police Commissioner said, adding: “The suspects have confessed to series of armed robbery and car snatching escapades perpetrated by the gang, including the most recent shooting of couples to death and being members of late Grave’s gang.”

The Police Commissioner said that efforts were being intensified to nab other fleeing members of the gang while the Sienna van has been recovered.

He admitted that the robbers gave his Command serious challenge as there were series of car snatching, trailing and robbing of customers from the banks such as shooting of one Basil Okechukwu around Post Office area in Umuahia after he had withdrawn money from a bank.

“These criminal activities became worrisome as requests for credible information on the gang never came but series of their nefarious activities and the blood of the innocent couples shot to death caught up with them when intercepted by gallant patrol teams on operation Puff Adder,” he added.

“Momentarily, we have rid Umuahia of armed robbers but we will not go to sleep because their members are still at large,” he assured.

As the pick-up van conveying the suspects crossed the gate of the Police headquarters, the crowd erupted in jubilation, with some women saying that they have suffered in the hands of the suspects and will now heave a sigh of relief.

I Am Not Ready To Reopen Churches, Mosques, Schools For Now-Buhari