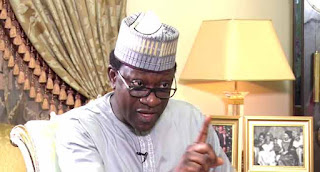 The leaders of the All Progressives Congress, APC, in Kano State have  teamed up against Abdulmumin Jibrin, a former member representing Kiru/Bebeji Federal Constituency.

By-elections took place on Saturday in the state for four state assembly seats and three federal constituencies of Kiru/Bebeji, Tudun Wada/Doguwa and Kumbotso.

It was  gathered that Hon. Jibrin fell out of favour of the party leaders over his condemnation of the conduct of governorship re-run election in state in March last year.

In a tweet posted on March 11, 2019, Mr Jibrin said: “Events of the last few hours in Kano is (sic) embarrassing, shameful and condemnable. As leaders we must act responsibly and allow the process to be peacefully concluded in the interest of our state and people. Every contest has a winner and loser. The winner must be handed victory.”

Hon. Jibrin’s had tweet drawn the ire of the party leaders, who vowed to unseat him whenever an opportunity arises.

On August 1 last year, the APC chairman of Bebeji Local Government Area, Sulaiman Sabo-Gwarmai, announced the suspension of Hon. Jibrin, “following a confirmation by the party that he carried out various anti-party activities contrary to the provision of the party’s constitution.”

When on November 1, 2019 the Court of Appeal sitting in Kaduna nullified the election of Mr Jibrin and ordered for fresh election in the constituency, the Kano party leaders saw an opportunity to work against the lawmaker.

Although Mr Jibrin had eaten a humble pie by apologizing and kneeling to greet the chairman of the party in the state, Abdullahi Abbas, at Mallam Aminu Kano International Airport tarmac, the former lawmaker was denied access to the governor.

In the run-up to the by-election, Mr Jibrin had met with President Muhammadu Buhari, allegedly to seek his intervention on the impending gang-up against him.

The former lawmaker, who chaired the speakership campaign directorate of Femi Gbajabiamila, reportedly invited the speaker to Kano to lobby the governor and other stakeholders to support him in the re-run.

It was reliably gathered that after rejecting Mr Jibrin, the APC struck a deal with his opponent, the candidate of PDP, Ali Datti Yako, to defect to APC immediately after winning election.

“We will never support Abdulmumin Jibrin in this election. It is a done deal we are supporting Yako. No matter how many times you forgive him, he will still go against the collective interest of the party. So the entire party stakeholders in Kano have decided to support the candidate of PDP Ali Datti Yako,” said a top party leader who preferred anonymity.

Unofficial results from the polling units, showed that all APC candidates in the re-run were coasting to victory, except Mr Jibrin.

It was gathered that the state commissioner for Education, Sanusi Majidadi-Kiru, openly displayed his battot for people to see that he voted for the PDP, just as the APC caucus chairman of Kiru Local Government Area, Abubakar Mai-Mai, also displayed how he thumb-printed for the PDP.

Mr Jibrin, who was first elected into House of Representatives in 2011, held powerful committees of Finance between 2011 and 2015 and Appropriation 2015 and 2016.