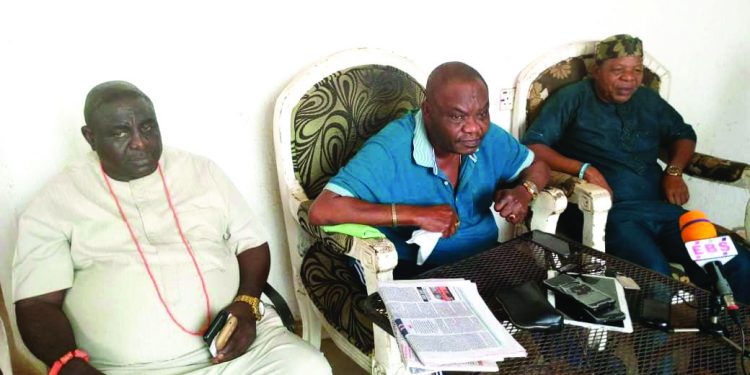 Former Edo State Commissioner for Information, Charles Idahoda has urged All Progressives Congress (APC) members to gird their loins as they prepare for governorship election.

He said the poll will determine the future of the ruling party in the Southdouth.

No fewer than 18 party chairmen under the aegies of the Edo APC Local Government Chairmen’s Forum have Idahosa as leader and arrowhead, following the suspection of Comrade Adam’s Oshiomhole by the faction loyal to Governor Godwin Obaseki.

The party chairmen, who paid a solidarity visit to Idahosa, an APC foundation member, at his Benin City home, said  he is worthy of the position, based on his sterling leadership qualities and contributions to the success of the party.

The spokesman of the forum,  Benjamin Oghumu, urged Idahosa to remain focussed in the fight to defeat “maverick politicians,” who do not mean well for the state.

Idahosa faulted claims in some quarters that the wish of Oshiomhole will prevail in Edo APC governorship primary.

While  thanking the chairmen for the honour bestowed on him as political leader, he also expressed gratitude to Obaseki, the party leader in the state, for repositioning the platform for success since his assumption of office.

He said  the governorship election, which is billed to hold for September 19, would determine the survival or extinction of the chapter.

On his  purported suspension by a faction of the party, he said there is no cause for alarm  as it as another wise goose chase

Idahosa said: “There is no cause for alarm. Don’t be bothered or shaken, Obaseki must do his eight years. If anybody by omission or commission stops him, APC is dead in Edo State. I have said it many times and I want the powers that be to understand this”.

“Those who benevolence spirit cracked their palm kernel for them should not think they are God. You (APC Local Government Chairmen) do not talk from both sides of the mouth because you have a gift of the garb”, he said.

Idahosa also spoke on the governorship ambition of four aspirants who are struggling with Obaseki for the ticket.

Idahosa, who hails from Uhunmwode Local Government Area, recalled that the aspirants kissed the dust before Obaseki during the 2016 election.

He also said the political gymnastics by some ‘dissident’ members of the party to stop Obaseki’s re-election was for their own pecuniary benefits.

Idahosa added: “APC will determine the kind of primary that they want, not one person. It might interest you to know that I have never lost any battle and I want to assure you here that I stand like the rock of Gibraltar behind the re-election of Godwin Obaseki”.

“Nothing will make me to leave him because he is doing the right thing. People are susceptible to change. There is no way that things are not a little bit stiff or difficult for all of us, unlike precious system that we are used to. But, for you to make an omelette, you must break the egg. He (Obaseki) is focused and nobody can bend him.”

Idahosa said Oshiomhole has no legal authority to function as national chairman of the APC, having been suspended by his ward.

The former political adviser to Oshiomhole noted that any action taken by the embattled national chairman is illegal.

He ssid: “Irrespective of your position, you are a member of the party and as President Muhammadu Buhari said in his speech when the caucus met; It is bottom-up. You have to be relevant in your unit, ward, local government and state before you can go to Abuja to claim big titles.

Warning the APC of the legal implication of retaining Oshiomhole as the national chairman, Idahosa said: “He has been suspended by his ward and the party leaders there. These leaders are not spirits; they came out openly to endorse his suspension. They are not hiding and have not denied saying so. However, he decided to ignore these leaders because he has never respected the party’s constitution.

“They are just postponing the evil day because at the end of the day, any action by him or any action he takes now as national chairman is null and void because it is an illegality. He knows this but he is pretending not to know. I only feel sorry for the APC because of the legal implication in the future,” he said.

Also, the leadership of the APC in Uhunmwonde Local Government Area has passed a vote of confidence on Idahosa, describing his suspension by a faction as baseless, and null and void.

This was contained in a communiqué  at the end of an enlarged meeting of the local council’s party executives held in Ehor, Uhunmwonde LGA .

“The party condemned their actions as it relates to the meeting held by EPM on February 2. The meeting is illegal, as they have no right to call for such meeting, which right is the exclusive preserve of the party chairman. The party disassociates itself from EPM as a group.

“Samson Osagie, Washington Osifo and Chief Solomon Edebiri remain suspended from the party. The meeting held on February  2, to suspend Charles Idahosa is illegal and the decision reached is worthless,” the communique read.

It added: “Charles Idahosa remains the indefatigable leader of the Local Government, State and the nation at large. A vote of confidence is passed on him as the Party Leader in Uhunmwonde, as well as on the LGA Party Chairman, Justin Omoruyi, and the State Party Chairman, Anselm Ojezua.

“A vote of no confidence is passed on the suspended national chairman of APC Comrade Adams Oshiomhole for his continuous stirring of political violence/crisis within the party and the state.”

The party leaders expressed confidence in the leadership of Obaseki and pledged support for his second term bid along with his deputy, Comrade Philip Shaibu.

Much better Concepts For Far better Physical fitness At This Time