Edo APC Crisis: I Will Deal With Adams Oshiomhole – Obaseki 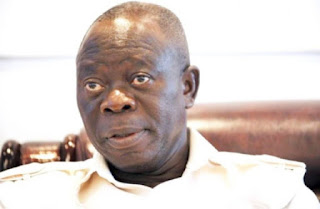 Edo State Governor Godwin Obaseki yesterday threatened to deal with the National Chairman of the All Progressives Congress (APC), Comrade Adams Oshiomhole over the crisis rocking the party in the state. The feud between Obaseki and his predecessor, Oshiomhole, has created a division in the APC in the state. Speaking during a meeting with chairmen of the APC in the 18 local government areas of the state, the governor said if the latter continued his activities, he may be forced as governor, to invoke his powers to deal with him and his allies in the proscribed Edo Peoples Movement (EPM).

The governor directed the chairmen to deal with anybody that wanted to do anything contrary to the APC constitution, saying he will not allow destructive elements to destroy the party.

“The party does not belong to him (Oshiomhole); it belongs to all of us. It is the members that make the party supreme and not one individual. “We are warning the suspended national chairman that if he continues with his activities in the state, I will show him that I am the governor of the state. When he was governor, he would not tolerate the misbehaviour he is exhibiting today,” he said “I have decided that if Oshiomhole comes to our state to disrupt activities of the state and party, we will deal with him.

He stands suspended and in due course, we will take appropriate action to expel him if he doesn’t behave well,” he said. Also speaking, the state Chairman of the APC, Barr Anselm Ojezua, said Governor Obaseki remained the people’s choice in the Edo 2020 governorship election.

How Nigeria widows suffer double loss after their husband’s death