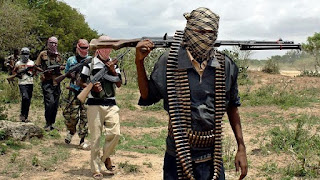 Three passengers have been slaughtered and another critically injured when suspected Boko Haram insurgents attacked commuters along Maiduguri-Damaturu road on Tuesday, security source said. The incident occurred near Auno along the Maiduguri-Damaturu road on Tuesday evening in Konduga Local Government Area of Borno State, in which three commuters were also attacked with machetes.

Security source said that the victims’ car developed fault and was parked when the insurgents attacked ,leaving three dead and one person battling for survival. “They used cutlass to butcher 3 passengers to death while one other person is battling to survive from injuries sustained from the attack.

“We found them in pool of blood, we have evacuated the wounded passenger to the hospital in Maiduguri for treatment, where he is currently receiving medical attention.

“The insurgents attacked the passengers who were travelling from Damaturu to Maiduguri when their vehicle developed fault on Tuesday evening, “said the source. It would be recalled that Maiduguri/Damaturu highway has experienced series of attacks of recent.