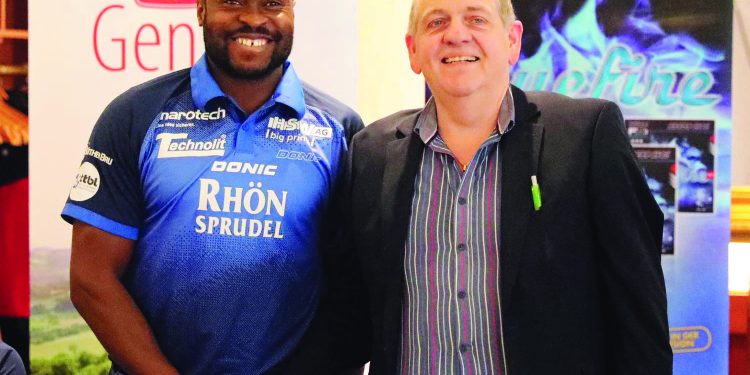 Foremost tennis star Aruna Quadri has changed  base after playing  a decade in the Portuguese league as he  signed a deal with German Club TTC RhönSprudel Maberzell Fulda yesterday.

Quadri flew from his base in Lisbon, Portugal to Germany to sign the deal which was brokered by a Lagos-based sports marketing firm, WEOAllSports.

At the well-attended  signing ceremony was management of TTC RhönSprudel Maberzell Fulda led by its President, Stefan Frauenholz amongst other dignitaries  including an impressive  German media.

Quadei’s switch  from Portugal to Germany was described by the Bundesliga Table Tennis League as a good development for the league.

President of TTC RhönSprudel Maberzell Fulda, Stefan Frauenholz, said  the decision to sign Quadri was based on the team’s conviction that the Nigerian has a lot to offer based on his global exploits.

“We are so lucky to sign Aruna Quadri because he is such a good player with excellent results,”Frauenholz said.“ This is a family club and we believe his passion and interest tally with the ideals of the club.

“We are so happy to unveil him today and we hope he can bring his wealth of experience to help the team next season.”

Akinwale Akinwole ‘WoleKanle’: The man with the purest of heart, a rare breed, the man who broke the poverty jinx and became the Messiah of our time

Why Buhari’s Govt Must Avoid Proposed Travel Ban On Nigerians, The Negative Implications

WE’LL RESTORE WATER IN THE NEXT FEW DAYS – ABIODUN

Bode Simeon Is After The Fall Of Labour Party-Abdulsalam