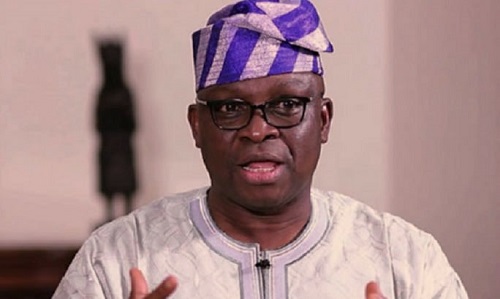 The Ekiti State chapter of the All Progressives Congress (APC) has threatened to petition the Economic and Financial Crimes Commission (EFCC), if former governor Ayodele Fayose fails to give a satisfactory explanation about the N400million earmarked for Akure-Ado-Ekiti road.

The party urged the ex-governor to clarify why it terminated the reconstruction of Ekiti portion of the road and chased away workers of KOPEC Construction Company, who were handling the project without a justifiable reason.

However, the ruling APC expressed surprise that he could be describing the road as being deplorable, alleging that the ex-governor during his first term misappropriated the N400 million earmarked for the project.

Responding, Fayose told the party to refrain from constituting itself into a court of law or an anti-graft agency that would be judging people on the issue of alleged corruption, urging it to petition the EFCC if it had evidence against him.

He said the APC-led government should dissipate its energy on how to deliver the dividends of democracy to the citizenry instead of spreading a campaign of calumny against him.

Addressing reporters in Ado- Ekiti yesterday, the APC State Publicity Secretary, Mr. Ade Ajayi, said the ruling party as a responsible and patriotic party would earnestly petition the EFCC if the ex-governor failed to give a satisfactory explanation about the money.

“The African Development Bank (AfDB) and the Federal Government had shown interest to reconstruct the road. Why was the former governor now lamenting? We were able to decode that he had ulterior motive, which was to dent the image of Governor Kayode Fayemi.

“When we asked him about how he spent the money, he dodged the question and we were baffled, because we expected him to say the truth. All Ekiti and the public knew that Fayose was responsible for the bad state of the road by revoking the contract after the contractor had mobilised to site.

“Why would a person who was responsible for the deplorable state of the road should now be lamenting? We are baffled over this. He should tell us where the money went, rather than lamenting. Our people must be careful with the politics he is playing.”

Ajayi further said: “This Fayose that was lamenting, spent N17 billion on a flyover that is not necessary. It could have been better if such money was spent on roads across the state.

“Governor Fayemi has re-awarded Oye-Ayede-Otun, Ilupeju-Ire-Igbemo-Ijan and Ode-Isinbode-Omuo roads. He should bury his head in shame. Anytime he is in Ekiti, he should ruminate on his past and how he got it wrong.

“We want to warn that APC won’t tolerate any.

So Safe Corps Arrest Man For Stealing Motorcycle In Ogun